The dangerous scenario: a bird hates a building! It also craps fire! You climb a ladder that also somehow moves horizontally, like those ladders-on-wheels in old libraries in kids’ movies, spraying water on the fire to put it out. If you’re not quick enough, a section of the building burns out and some poor soul falls to his death, unless you can grab him and take him to the top of the ladder, where a helicopter frequently flies by and takes them to safety, perhaps in a secret mountain base on the other side of a volcano. Perhaps it would make more sense to bring the jumper to the ground instead of a helicopter that can only carry one guy at a time, but whatever, firefighter guy, I’m sure you know what you’re doing. If two columns of the building completely burn down, or you get smacked on the head by several people falling to their deaths, then it’s game over, but if neither of those things happen, then the game doesn’t end. There are no levels, no bonuses, just a bird that gradually speeds up and a score that keeps goin’.

Most people, however, probably won’t get that far, as the game takes forever to get remotely challenging, so for the first ten minutes you’re putting out fires that the bird drops once every five seconds or so (which doesn’t sound like a lot, but it’s an eternity of sitting on that stupid ladder waiting around). Once the difficulty level ramps up a bit it gets a little more interesting, but the gameplay is fairly monotonous regardless of how fast the bird is flying or the fires are burning. I’d play it for ten seconds, say, “Yep, I played that game, all right,” and move on.

Here’s a “fun” fact: according to the instruction “manual” (which is probably about as long as this review), the firefighter’s name is Piggo. The first line reads, “As if our fearless hero, PIGGO, the firefighter, didn’t have troubles enough. . .” This paints a very sad picture, at least in my mind, of this poor firefighter, who wakes up one morning to an empty bed and a note saying his wife left him and took the kids, and then he tries to get to work but the car is busted so he has to take his daughter’s bike (the one with the pink tassels) to the station, and on the way he’s splashed with mud by several cars driving past, one of which also throws an empty beer can at his head, shouting about all these “fat *$%#ing tubs of lard hogging the $^%#ing right lane on their stupid $&#ing bikes.” When he gets to the fire station, the chief notifies him that he’s being laid off the next day because someone stole their truck and they have to make cutbacks in order to afford a new one, but for today he gets to use the mobile ladder on wheels with the hose tied to it. Just then he looks out the window and notices that a giant firebird is burning down the city. “Aw, geez, a &^%$ing firebird, too? After the day I’ve been having?!? COME ON, YOU &#^%ING FIREBIRD, SHOW ME WHAT YOU’VE GOT!!!!” Soon he gets beaned by a jumping tenant and falls off the ladder to his death. 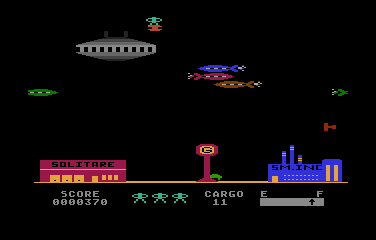 From the same company that brought you the pathos-filled Firebird comes this “exciting” game! The manual lays out this detailed backstory about how some galactic organization has passed a trade embargo causing the citizens of Zorbulon VI or whatever to suffer and who will be brave enough to violate sacred trade agreements blah blah blah The Phantom Menace blah blah blah whatever I’m already bored.

The real story of this game, as made up by my childhood brain twenty-five or more years ago, concerns a wacky interplanetary McDonald’s scheme! Green Happy Meals, brown hamburgers, and pinkish hot dogs (shut up McDonald’s does hot dogs now) move across a conveyor belt between the Solitare [sic] plant and the SM. Inc. building. Your job is to swipe as much food as possible and stuff it into your giant spaceship to take back to Mars, for as we all know, Martians love them some fast food but there aren’t any franchises there (yet), so this is their only option.

Basically you’re a blue UFO that dodges flying rockets, Frogger style, to pick up some colored shapes in order to stuff them into a giant flying saucer. Once you’ve picked up enough of them, it flies off and you move to the next level (where ECCAMF). Crashing into anything will kill you (you can also crash your cargo into something, which will disintegrate the cargo but leave you intact). There’s also a flying “H” which will take potshots at you that you can destroy, but which takes maybe two-thirds of a second to respawn so it’s usually not worth it except for maybe to get some points. You also have a fuel gauge that I couldn’t figure out how to refill (other than dying or passing a level), so I guess it acts as a level timer? Maybe fuel appears at higher difficulty levels? I never got it to appear.

Embargo is better than Firebird, but that’s not saying a whole lot. I think the main reason I liked this game when I was younger was because of the silly McDonald’s backstory I made up for it. As it stands, it plays pretty well for the first few minutes but can get monotonous pretty quickly. However, it is colorful, well-made, and doesn’t have any obvious glaring flaws, so it’s all OK. 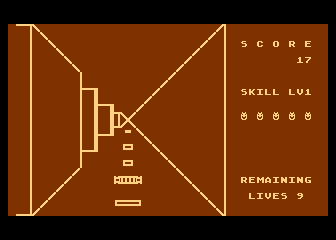 Bad Idea: Doing it with terrible ASCII graphics suitable for ZZT (I’d say that making a ZZT reference shows how old I am, but then again, I am reviewing old Atari games), where the monsters (read: Pacman ghosts) are either slow as dirt or too fast to avoid, where the power pellets, er, “vitamin pills” always wear off too quickly to actually take down a monster, where looking at the map doesn’t pause the game and lets a monster kill you, and where the game doesn’t actually run properly on most Atari configurations, causing it to either never load or get stuck on the title screen in an infinite loop.

That does it for Disk 23. Next up is Disk 24, which is… kind of its own unique thing, so the next normal disk we’ll be looking at is Disk 25, which covers Turmoil, Amphibian, Pinhead, and Vanguard. ‘Til then!