Before I launch into uncharted waters, reviewing games beyond those I had originally planned, I’d like to take this moment to pull together some interesting numbers from all the games I’ve reviewed (and thus all the Atari games I had growing up) and see what trends develop (excluding the L.E.A.P. Disks and my old BASIC games):

Games where you control vehicles other than spaceships: 18 (17%)

Games where you control a guy/animal who jumps around or climbs ladders (or trees or whatever), usually viewed from the side: 25 (24%)

(note: this doesn’t count games like Bruce Lee or Pitfall II where you’re freely exploring a game world with multiple ways to go: these are similar to Pacman mazes.)

Games based on pre-existing games, usually either sports or board games: 14 (13%)

(I may miss some of these if they’re based on games I haven’t played/am not familiar with. I’m also not counting ports from arcade games with the same name, like Asteroids or Pacman.)

*Popeye was actually what Donkey Kong was supposed to be until Nintendo couldn’t get the rights to the characters, so I’m putting it here for that reason.

These don’t add up to 100% exactly, since some games fit in multiple categories. And now: charts! 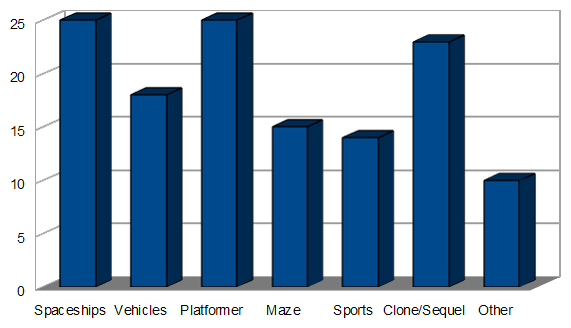 So what can we extrapolate from all this? Here are some of my conclusions: