Here’s a quick sub-category in my Atari Reviews that will be interspersed with the original ones. These are reviews of nine different “L.E.A.P.” disks that we possessed. Now, I don’t actually know what “L.E.A.P.” stands for, but presumably it’s something to do with education, since almost all of these are lame little BASIC programs that are often educational and rarely anything more. Since a lot of these programs are super-simple to play and describe and rarely have any interesting screenshots, I will give mostly a simple summary of what each one is, including more verbosity and maybe a screenshot if the program is in any way deserving of it. Any program of note I will also mark with a red heart (♥)

Note:each L.E.A.P. disk had a program on it called “Menu.” This program, when loaded, well, re-loaded the menu. Due to my desire not to be redundant, I’m not going to mention that on every disk here.

Second note: A reader of my blog may ask, “Why are you reviewing these when there isn’t a soul out there who would possibly find this information useful?”

You’ve got some nerve, mister.

Besides, you’re wrong! I write this blog mainly for myself, and I’d sure like to know what all these L.E.A.P. games are! So, with no further adieu, let’s get started.

Bagels – Like the game Master Mind, the object is to guess a 3-number sequence and the game will tell you (by using confusing terminology like “pico” and “fermi”) if you have a number in the right spot, the right number but the wrong spot, or no right numbers at all.

Trap – Guess the number with a twist: put in two numbers and the computer will tell you if the number is inside, higher, or lower than your range. Oh, you also only get six guesses total.

♥ Geography – Now this one’s an interesting one to play, although very outdated. It might make a fun game to play in the car or something. The object is to name a geographical location (you’re limited to continents, countries, U.S. states, Canadian provinces, U.S. state capitals, major world capitals, oceans, and major rivers) and then the computer names another one that starts with the last letter of the one you just named (e.g. Delhi-Iran-Nebraska-Athens). When you can’t think of one you type “challenge” and if the computer can’t think of one either, you win! If it can, you lose. Since the game was made in the early eighties there are some entries that don’t exist and some that would be valid today that didn’t exist then, but it’s still an exercise for the geography lover (Nate Winder, I’m looking in your direction!)

MltBingo – Bingo, but using times tables. Since you aren’t given what numbers make up each square on the grid it’s basically just a multiplication quiz with patronizing comments (like “Tens are fun!”)

Scramwds – It gives you a word. You unscramble it.

Sinewave – You can plot out a sinewave equation. Useful if you lug an Atari around instead of a graphing calculator.

Hangman1 – Just a simple hangman game, with a disturbing message if you win:

Bourreau – The same Hangman game, but in French. 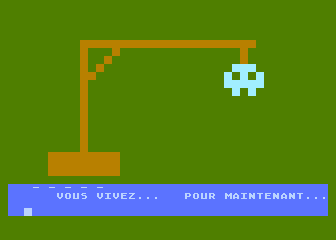 Statecap – Given the state, name the capital. Or vice versa. You can do it multiple-choice or fill-in-the-blank style.

Findkey – Apparently for pre-schoolers (since the intro asks “What is your child’s name” and colors the screen pink or blue depending on gender), it shows a giant letter made of smaller letters, and asks you to find it on the keyboard.

Hangquot – Hangman again, but with famous quotes instead of just words. (Although I’m not sure of some of these quotes: “A fool’s honor is summer snow”?!? What the crap?)

Geometry – A very slow trigonometry lesson. That’s about it.

Graphics – A semi-interesting look into how some Atari graphics are created (the solution is a lot of POKE-ing).

Lifequiz – Answer a bunch of questions and the program will tell you your life expectancy (mine is apparently 82 years).

Alcohol – I find this one hilarious. You enter in how much alcohol you’ve had, the proof of the liquor, and your weight, and it tells you how drunk you are. When is this program gonna get seriously used? “Hey, Jed, we’ve sure had a lot of beers tonight! Let’s see how drunk we are by using this educational program I found on this disk for my 25-year-old computer system! And if our blood alcohol level is over 100, we’ll know it’s OK to puke on the keyboard!”

Biorythm – Made by an author who can’t spell. This plots your biorhythm based on your birth date. If you want to know what a biorhythm is, look it up, man. I can’t do it all for you.

Calories – A calorie-counting program. Incredibly exciting, but obviously not too useful (it didn’t recognize “steak!”).

♥ Light – A scientific explanation of light. I only give this one a heart because it’s got some trippy graphics, man.

Remaindr – Give the computer a number and it divides it into a number it’s thinking of and give you the remainder (or tells you if it’s odd or even, or just if there is one or not on higher difficulty levels). Then, guess the number.

Matches – I dunno. The program’s got an error in it.

Algegrap – You can plot points, or a simple linear or quadratic equation.

Hanoi1 – A simple version of the Towers of Hanoi. You can choose from three to nine disks.

Noteprac – Gives you a music staff and a note on it. Name the note.

Numbline – Odd little program that lets you pick an upper limit and a number to be the multiplier. Then you fill in a six-digit number line under the limit you picked, using the multiplier for an increment. The title screen inexplicably features an ASCII rocket

♥ Slide – A pretty fun game for two to four players. Each player starts at the beginning of a line. Then the computer gives out three numbers and a player is allowed to perform any arithmetic operations they wish using the three numbers. The end result is how many spaces they move forward (provided, of course, that you can solve the math problem yourself). If you land on an opponent’s spot he/she gets bumped back to the start, a la Sorry.

♥ Volcano – Produced soon after Mt. St. Helens erupted, this gives you some facts about how devastating it was (and how idiotic people were by camping out waiting for the eruption). It also includes a little choose-your-own-adventure section which lets you see if you can survive a volcano erupting nearby. It’s pretty fun, until you realize that a lot of people played this game for real in 1980, and those who picked the wrong option ended up dead.

Primeset – Lists all the prime numbers from whatever you put in as an input until the end of time (or you hit the BREAK key). Also calculates cube roots (to two decimal places) and does a bubble sort routine. I have no idea what that is, but if you’re a math person you might.

Alphamus – Type in the alphabet. For every letter you type it plays the next note of the Alphabet Song. Yay.

Alnum2 – A tiny step up from the last program, this one picks a number or letter and you have to type it. The down side: no Alphabet Song. What a gyp.

Countsq – Squares appear on the screen. You count them. If you’re right, a ridiculous four-part harmonious tune plays. Rinse and repeat.

♥ Function – Fun mostly for its graphics, although the idea is intellectually stimulating as well. The computer picks a function (adding a number, subtracting or multiplying a number, multiplying AND adding a number, or random functions). You put a number into the “function” machine and guess what’ll come out the other end. The number then undergoes a painful-sounding process in a caulk gun and comes out the other end all multiplied and divided. After you guess the right outcome several times you guess the function! You win!

Botch – Weird semi-hangman game that bites. There are no graphics, and the guessed phrases are gems such as “Branch on sleepy operator.” ?!?!?!?

Challeng – Another guess the word game! You compete against another player instead of a hangman’s noose this time. Instead of just pressing a letter key, though, you’ve got to move the cursor to the letter you want to guess using a joystick, adding a tedious step to an otherwise simple game.

♥ Haiku – A weird little program. You enter in eight phrases and it makes random poems out of them for you, for non-sequitur fun! Example, using random phrases taken from my other blog:

Simon – A simple Simon game. Each direction of the joystick is a different color (and musical tone). Copy the computer.

Tunein – Also a Simon game, this one has the added bonus of four players that rotate.

Count – Gives you a line of random letters, then you have to count how many of a certain letter are in the line (i.e. How many J’s are in this line?). If you get it right it plays “When the Saints Come Marchin’ In.”

SciQuiz – A true or false science quiz, made in 1981, although it’s more about the recent history of scientific discoveries than science itself. You decide if this question is obscure or not: “The World’s first transistor radio came from Texas Instruments in 1953. It used 4 germanium junction transistors and cost $40.” This is true, by the way.

OldMac – Match farm animals. Or count them. Or some other damn thing. The interface doesn’t make it clear.

Flags – It displays a flag. Guess what country it’s from. Of dubious educational quality. Compare: 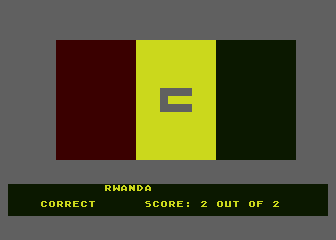 Even taking into account that this program was made in the ’80’s, where the crap does the “C” come from?

Cats – Easy (for 1980) way to make a quick multiple choice, fill-in-the-blank, or true/false test and print it.

The remaining disks I will review soon!