I have absolutely no idea how this game works. I never learned how when I was a kid. I searched online recently for a manual, a review, anything regarding this game other than a ROM download and a cartridge scan, but to no avail. I assume you are a Jumbo Jet Pilot somehow taking off and landing and stuff. The controls, however, are entirely inscrutable. Moving the joystick caused the little lines to move across the top of the screen (the viewport, I assume), while pressing the trigger caused the view to turn red. Random keyboard buttons caused some of the boxes to turn on and off. I guess there’s an altimeter, an artificial horizon, and a fuel gauge, but as for the rest of the controls I have no idea what they are. A scan I found of the back of the cartridge contained the helpful hint to lower the wheels when you landed. In conclusion, go buy Microsoft Flight Simulator or something. Or help me figure this bloomin’ game out. Whatever.

I’m afraid I’m going to have to disappoint fans of WWII simulation games with my review. This game, according to many online sources, is an intricate strategy game wherein you actually control the German forces for once, invading Russia. You have two unit types: infantry and cavalry, and can enter up to eight moves for each unit per turn. Then the computer simulates combat for a week (of game time, not real time), after which the units that were attacked and defeated must retreat. The strength and muster of each unit could be damaged in combat, but could be built up again due to supply lines (contiguous units) In time the winter would set in, and the lakes and rivers would become passable, but the units would be weaker and more vulnerable. After winter there is a short spring, but the game ends in March of 1942, giving the player 41 turns to overcome the evil Russian forces, who outnumber the player in terms of units and land controlled, at least at the beginning of the game.

Eastern Front suffers from what I call “manualitis,” that is, a dependence on the manual that makes gameplay incomprehensible without first reading the manual. While this isn’t by itself a problem, it becomes one when a person has acquired this game without a manual and therefore has no idea what’s going on, as I did growing up. Still, according to many online sources, this game is a satisfying war simulation, especially for the time, and I would recommend it for strategists and war buffs. Plus, not many WWII games let you play as the Germans without playing some sort of horrible Nazi character, so I guess that’s something.

It has been said that, in terms of creative, unique, and compelling gameplay, the king of the Atari 8-bit games was Synapse Software. With classics I’ve already reviewed such as Claim Jumper, Necromancer, Picnic Paranoia, and Fort Apocalypse, as well as some other excellent games I will be reviewing down the line, Synapse certainly does have a unique style of game. But perhaps no Synapse game is as unique as Drelbs, a two-phase game in which you play a nervous eyeball with feet. Your object during the first phase is to wander around a maze of walls that flip when you press against them. Every time you make a box with these walls (and you’re not inside said box), a phone-ringing sound goes off and the box turns into a abstract expressionist painting (well, OK, it’s just a rectangle with two lines, but it makes me think of a Mark Rothko work). Pursuing you during this attempt to enlighten the world with a sense of 1950’s artistic style were two opponents: a stripety zig-zag enemy that circled the playing field taking potshots at you that would ricochet off the walls, and an angry-looking rectangle face with a mouth like the Yip-yip aliens from Sesame Street (or, more appropriately, Telly). Occasionally one of the Rothko works would turn into a green alien with Bart Simpson hair, who would look around shiftily and then destroy your box, turning it back into empty walls that you’d have to reform into a rectangle again. Also occasionally, a heart or diamond would show up, and if you grabbed it you got some points and the mean rectangle guy would turn green and freeze, allowing you to seal him up in a box. This creates a giant close-up of his face where you can see right up his nostrils (not a pretty sight), and he’d destroy your box after a certain time period and begin wandering again, but at least he’d be out of your hair for a while. And rarely, when the green-faced alien would show up in a box, for a brief second a woman’s face would appear and shout “HELP!” Jumping onto the box when the alien was showing was instant death, but jumping onto the woman resulted in a kissing sound and a short cutscene in which your eyeball-foot would cover up a grid of that green spiky-haired alien. This leads me to believe that the underlying plot of this game is that classic sad tale of girl meets walking eyeball, girls falls in love with walking eyeball, girl ends up leaving walking eyeball, girl meets spiky green alien, girl falls in love with spiky green alien, girl feels trapped by spiky green alien, girl misses walking eyeball and wants to be with walking eyeball again. I mean, how many times have we heard that old story?

In any case, once the entire playing field is filled with expressionist rectangles, every single one, in turn, turns into a green alien box. Also, occasionally one turns into a portal that looks like several of you. Jumping onto one of these causes a jump to the second phase of the game, in which you find yourself on a black field with several frozen blue versions of yourself and that green alien again. He starts shooting at you while you run around this field, and every time you touch one of your frozen kin, it turns purple and flies off the screen. That’s it. I don’t know how this game was made, but it totally had to involve LSD.

If you get killed by the green alien you go back to the first screen (with the boxes still filled in, luckily). If you grab all of the frozen versions of yourself, you move to the next level, which is the whole thing all over again, but with two frownie-faced orange rectangles in the first part and two green aliens in the second. Also, as was the style at the time, the colors change a bit and everything moves faster. Also, the title screen features the tune “Wilder Reiter” by Robert Schumann.

Drelbs is one of the weirdest games I have ever played. The graphics are fine if you don’t think about them too hard, and the sound is equally demented, especially during the first stage. However, an odd concept does not a great game make, necessarily. Fortunately, Drelbs is a whole lot of fun, too. The gameplay is varied enough with the two stages and the fact that during the first stage you basically make your own maze, since you create the rectangles. Highly recommended, and it probably works even better if you’re stoned. (Note: the creator of this blog does not promote or condone the use of drugs in any non-prescribed way, particularly in the case of video-game-experience enhancement.)

In Miner 2049er you take on the role of “Bounty Bob” whose job it is to run over every segment of floor in this, mine, I suppose, although what is being mined is never made clear. Every time you run over a bit of floor it turns solid. Once the entire level has been made solid you move to the next one. Sounds pretty simple, eh? There are a few obstacles to this mine inspection process, however. For starters, if you fall too far poor Bob gets squashed inside his own hat, earning him a permanent job as a citizen in Agent USA. To complicate matters there are little radioactive creatures left wandering around that also mean instant death for Bob, making him grow and shrink to some electrical-sounding noise, and also making him inexplicably get squashed inside his hat. To counteract this threat, though, each level has mining tools scattered about (pickaxes, dynamite, candles, inexplicable items like flower pots or wine glasses, etc.) and when Bob grabs one of these, the radioactive creatures turn into happy green harmless drones worth 80 or 90 points each! What a bargain!

There are ten levels in all, and in addition to the difficult jumps, mining tools, and radioactive creatures, each level has its own challenges, from slides to elevators to moving scaffolding machines to a giant vat of radioactive waste to even a cannon. Once you beat all ten levels you start the first one over where (repeat after me) everything changes color and the enemies move faster.

Miner 2049er is an excellent game. The ten varied levels of gameplay add a good replay value, as does the timer, which leads to a higher score if you can finish a level in a shorter time. There is also a cheat available: by typing in the game company’s phone number (found on the title screen) you can pick which level to start on, which is useful if you want to see that tenth cannon level that everyone’s talking about. This game also inspired a sequel, Bounty Bob Strikes Back, which is also an excellent game, I’ve heard, since for some reason I haven’t been able to get it to work on an emulator.

According to online sources, Bounty Bob is apparently a Mountie, although his dayglo outfit doesn’t really fit with their conservative red uniforms. Also, he has no horse. 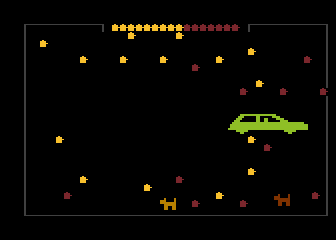 This is probably the only Atari game that revolves around peeing dogs, at least that I’m aware of. In this two-player game, you play as the yellow dog or the red dog. A flashing blue fire hydrant appears on the playing field, and the dogs must race each other to mark the hydrant as his or her own (you can also throw a bone at a flashing hydrant to mark it, but if you miss you have to go pick the bone up before you can throw another one). Every time you get a hydrant you get a point, which is represented by a row of hydrants at the top of the screen. You also get points if your opponent runs into a hydrant of your color, which also stuns him/her. Once you take over the point meter with your color, you win! Ruff! Occasionally, a car honks and drives through, and if your opponent gets run over you automatically win! Woof!

Dog Daze is very simple, and the graphics are very minimalist. In addition, there is no one-player mode, so you must team up with someone to get the most doggy fun out of this game. It’s pretty fun, although very one-note (since it doesn’t have any customizable game options like Race in Space from disk 8), so if you and a friend are bored you might as well take the chance to pee on some hydrants.

That’s it for side 1 of disk 9. Stay tuned for the second side, in which we review Onslaught, Apple Panic, Wizard of Wor, and Gorf. Catch you then!