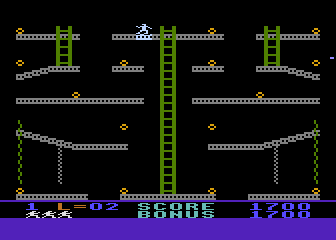 After Jumpman, there was Jumpman! And after Jumpman, there was Jumpman Junior! In the original Jumpman (to which Jumpman Junior is basically an extra level pack), you were the title character (not related to Mario) whose duty it was to collect bombs that some nefarious force had placed all over Jupiter. Nevermind that a person would be crushed to death by the atmospheric pressure and wouldn’t be able to breathe, let alone construct some sort of puzzle-filled base for terrorists to put bombs in; we’re on Jupiter, and that’s that. In any case, most levels consist of running, jumping, climbing ladders, etc. while bullets patrol the screen slowly, suddenly firing quickly at you if you’re lined up horizontally or vertically with them. In addition to this, most levels have some sort of puzzle-y gimmick to them, such as ledges that disappear, hailstones that drop from the top of the level, giant walls that push you off the edge of platforms, and even a hurricane that constantly pushes you to the right, along with a flock of birds. On Jupiter. You know, Jovian birds. Work with me here.

Like previously mentioned, Jumpman, Jr. is more of the same gameplay as Jumpman, just with different levels, but the game is a lot of fun. It’s fairly difficult, too, as you only start with three lives and can gain extra ones only by getting a certain score. The levels are varied and range the entire gamut from ridiculously easy (like the “Electrocution” one up above) to quite difficult (such as a level that reveals itself as you walk around it, meaning that you don’t know where the end of a ledge is until you walk off of it and die). 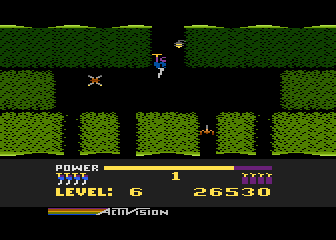 Recent history has shown us that the dangers of mining are very real and hazardous. From cave-ins to hazardous atmospheric conditions, to radioactive burning walls and pools of pink acid filled with deadly octopi, modern miners face all sorts of difficult conditions while trying to mine the precious minera…

That’s what the game H.E.R.O. would have you believe, anyway. Nobody’s quite sure what H.E.R.O. stands for (Wikipedia offers up at least three guesses), only that it has something to do with helicopters, so I would like to say it stands for “Helicopters Eating Real Oranges.” Yeah, I know, it sucks, but I can’t think of anything better right now. In any case, you play our plucky H.E.R.O., flying into dangerous mine shafts to rescue trapped workers. Also, nobody’s quite sure why the powers that be gave him an implausible helicopter pack instead of, say, a jetpack, or an environmentally sound rope and tackle set or something. Maybe the game was designed by Leonardo da Vinci.

Anyway, in addition to the red walls (which the manual calls “magma” but come on, magma’s a liquid! Do the research, people!) and octopi tentacles, there are other types of fauna that are deadly to the touch, including snakes, spiders, and some sort of frightening butterfly hybrid as shown in the screenshot. Even a recolor of the bat from Pitfall II makes an appearance. Most of the (later) levels consist of two parts: first he drops through a set of improbable caverns until he reaches the bottom which is flooded with either water, green acid, pink acid (I guess), or mud. Really liquidy mud. Then, he side-scrolls through a couple screens and rides platforms across the liquid until he reaches the trapped miner, after which the level instantly ends. No mention is made of how the H.E.R.O. actually evacuates the miner, so I assume that he is actually just a Catholic priest, flying into mines to perform last rites before perishing along with the miner in the gloom.

The H.E.R.O. is not defenseless. First of all, he has a few sticks of dynamite which he can use to blow open certain doors. I don’t know how safe it would be to blow open a wall with a stick of dynamite when one is already deep inside a claustrophobic mine shaft, but hey, I’m not an engineer. Secondly, he can also shoot laser beams from his eyes.

H.E.R.O. is a pretty fun game that’s difficult to master. A lot of the gameplay is simply trial and error (going down the left mineshaft lets you progress, while going down the right leads to instant death, etc.). The controls are a little wonky (it takes a second after you press up on the joystick for the man to actually move), but that adds to the challenge. Also, in many rooms there is a lantern hanging on the wall and if you accidentally touch it then the room goes dark except for enemies (which turn gray), raising the difficulty level even more. Overall, sometimes frustrating, yet not enough to turn off most gamers. I recommend it. 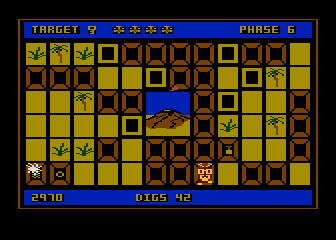 This is a weird game. You star as Java Jim, a digger with glasses who is digging up a, what, tropical island, I guess? Maybe it’s in Indonesia, given the title of the game? Anyway, you are seeking random treasures, like rings, keys, crowbars, dynamite plungers…ok, these are less treasures than they are random stuff you can dig up on the beach using a metal detector. However, the whole time a volcano is tossing lava shots at you. If a bit of lava hits a hole, it fills it back up again. If it hits solid ground, then a tree or a bush suddenly grows there. And occasionally, the lava will spawn either a spider that stuns you or a strange creature that looks like a cross between a frog and a hippo that will either kill you or get killed by you depending on its color. This is very fertile lava.

After you dig up your quota of random crap, then the volcano turns into stairs (?) and you climb up to the next level. You only have a certain number of times you can dig, after which you need to crawl into a hole and steal shovels from snakes.

Like I said, this game makes no sense. It doesn’t have to do with coffee, even. Still pretty fun, though. 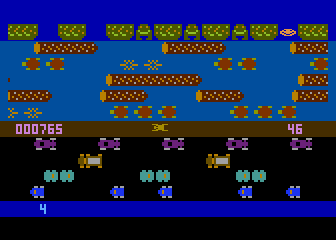 This is the third take-off on Frogger that I’ve reviewed on these disks, and out of the three (this one, Frogger 2, and Preppie), Froggie seems to be the most faithful to the original. Unfortunately in this case, that simply means that it’s basically the same as Frogger with worse graphics. The story is a tale as old as time: frog wants to cross street, frog avoids cars. Frog wants to cross stream, frog leaps across logs and turtles (that submerge sometimes). Frog leaves identical frogs across top of screen, and repeats the process five times. Frog goes to next level, where everything moves faster. Yeah, it’s a fun concept, but this is just a Frogger clone without anything distinctive to separate it from the original. If you’re going to play Frogger, go play Frogger; don’t bother with Froggie.

Oddly enough, I’ve reviewed at least three take-offs of Frogger, yet the actual Frogger is nowhere to be found on these disks. Strange. 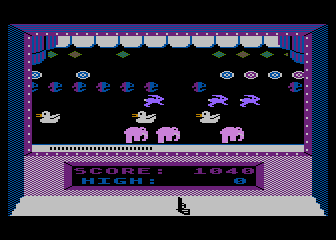 Yay! A shooting gallery! You’re a gun, and you shoot things going across the screen for various amounts of points! Most of the objects just disappear when shot, but some reverse the direction of everything, some give you more bullets, and some make other targets reappear! When you’ve shot them all, they all reappear moving faster! Also, circus music is playing! If you run out of bullets, then you just sit there, totally screwed! Whee! 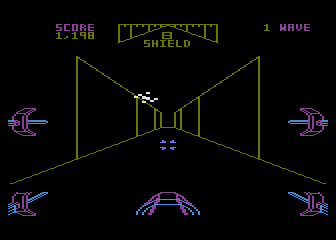 What if the entire Death Star attack sequence from Star Wars: A New Hope was seen exclusively from the viewpoint of Luke’s targeting computer? My bet is that it would look very similar to this game. It consists of three stages: first, destroy some TIE fighters; second, blow the tops off some towers (which look like actual, literal towers instead of the turrent guns from the film), and finally, fly through the trench and fire into the exhaust port, blowing up the Death Star. Sadly, instead of a big ceremonial march, you instead then advance to the next stage, where the Empire has quickly built a whole fleet of new Death Stars right behind the first one, so you have to do it again and again and again! The only way to escape it is to use the Force Reset button, Luke!

That finally does it for disk 12! Coming up next: disk 13, featuring apparently just Lode Runner. That review will probably be posted in a much more timely manner than this one. It’s one game. See you then!