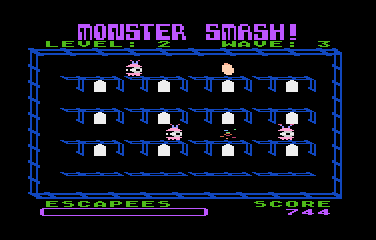 Anyone expecting this game to represent someone working in their lab late one night when their eyes behold an eerie sight may be somewhat disappointed. However, this game is representative of something that a lot of pre-1983 arcade and home console games excelled at and were most remembered for: simple action that, for some reason, sucked you in for a long time trying to rack up the highest score that you can without ever seeming too repetitive. Your goal is to smash as many monsters as you can (the monsters in this case being either squat, pink garbage can-looking things with antennae and rotating eyes, collections of dots, or occasionally an egg that hatches into a lizard if not smashed). Said monsters run to the right and down through this, uh, graveyard, I suppose (it is a graveyard smash!) Your only controls are rotating one corner of the fence, creating paths that direct the monsters either down or across, and smashing all the gravestone/flipper/smashy things at the same time! You get points for every monster you smash, but if you let more than a certain amount escape, it’s game over! Each wave makes more monsters appear, and each level makes them go faster.

It’s a simple hand-eye coordination/reflex game, but it’s a lot of fun, too. If it had better graphics it’d be a top seller on iPhones, iPads, and Android devices today (though I hope the theme song would stay the same, as it’s pretty goofy on its own). 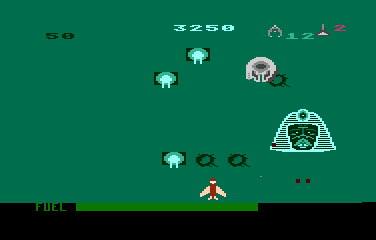 Here’s some trivia for you: A Google search for “Stargate Courier” brings up three things in order: the Tok’ra couriers from a Stargate: SG-1 RPG supplemental book, the classified business ads from Abu Dhabi, and finally, this game. In other words, this game was obscure enough to be beaten by both a little-known entry in a supplemental RPG book and ads from halfway around the world (at least from where I’m writing this). So, this game, famous? Nope!

What it is is a weird mesh of several different games/sci-fi franchises. Your job is mainly to fly around space and shoot twelve enemy ships that look like giant 80’s hoop earrings that mostly just suck your fuel away if they get near you (although they may shoot at you too).  If you run low on fuel then you have to fly back to Earth (wait, this is taking place in the solar system? Why all the densely-packed stars, then?) where, in true shoot-em-up fashion, you’ve gotta shoot some fuel tanks to refill your supply. The Earth segments are hazardous, though, as not only are there turrets that take potshots at you, but also the occasional angry Sphinx (which I suppose is somehow tied to Stargate, but since this game came out at least a decade before the movie I suppose it’s a moot point). Also, for some reason, the Millennium Falcon is flying around and gives you 1000 points if you shoot it. So there’s that.

All this weirdness could be forgiven if the game was any good. Sadly, it’s a mess. The graphics are uninspiring, the sound is fairly stock, the controls are broken in the outer-space portion of the game (you move forward at a set speed and one push on the joystick sends you spinning at an insanely high rate), and, while the Earth segments have much better controls, they’re also pretty boring, as you’re stuck in an endless loop of fuel tanks, turrets, and Sphinxes, until you decide to lift off into space again. About the only thing it’s got going for it is a half-way decent heroic jingle that plays when you start the game, but it’s not worth much. There are better shoot-’em-ups out there, and if you want a good Stargate Courier experience, stick to playing the Stargate RPG or maybe starting your own business in the United Arab Emirates.

That’s it for Side 2 of Disk 15. Coming up next: Pharoah’s Pyramid, Mr. Robot and his Robot Factory, and Starion.