A “Baja Bug”, according to Wikipedia, is an old Volkswagen Beetle modified to go off-road, presumably to compete in races across sand dunes and whatnot. In this game you are driving one of these crazy vehicles through some sort of desert race course, trying to get first place out of the eighty(!) racers you are competing against. Fortunately, you’ve evidently souped up your old bug with illegal mods and some nitro boosters, as you can hit speeds of about eighty miles per hour while all other racers can’t make it past forty. Unfortunately, this means that you’ll be bashing headlong into the racers ahead of you frequently if you don’t brake well, and while this doesn’t make you crash, it does bump your speed immediately down to 20 and it takes a few seconds to accelerate back up to full speed. Hilariously, though, if you pass a racer and then bump into the one ahead, sometimes the one behind bumps back into you, causing you to suddenly jump back up to 60 MPH or so, a tactic I wish could be used whenever somebody’s going slow in the left lane on the freeway.

The course itself is mostly just yellow lines that scroll past you and occasionally curve, much like PitStop. There are two courses (well, three if you count the one marked “R”), though the only difference between them is where the road curves, but since there’s no map or real 3D perspective it’s kind of a moot point unless you memorize the courses or something. The only clue you have to where you are in the race is the indicator on the bottom right of the screen, which not only gives you your current placement in the race (“61” in the screenshot), but shows how close you (the red dot) are to the first place bug (the white line).

Baja Bug is all right. It’s not really that bad of a racing game, but there’s nothing really unique or special about it to differentiate it from other similar racing games other than maybe the type of vehicle you’re driving. But since that has no real effect on the race (oddly if you go outside the lines of the race you slow down dramatically, even though Baja Bugs are specifically off-road vehicles) and the graphics are too crude to really tell what kind of car you’re in anyway, there’s not that much to recommend. It is what it is. 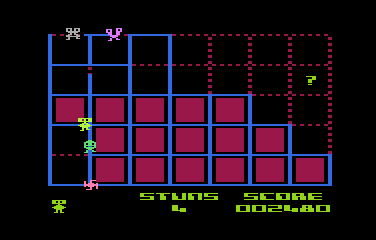 Oh, you want more of a description? But that says it all!

Fine, fine. Kid Grid stars you as a kid, maybe(?) with giant glasses who navigates a grid, turning dotted lines into solid ones and making boxes. Pursuing you on this juvenile lattice are four of the most sinister and evil enemies you will ever encounter. There’s Old Gray Googley-Eyes, the Dancing Purple Two-Headed Twinkle-Toes, Indifferent Turquoise Man, and the Red Orb of Spinny-Bladed Doom! All of these enemies behave in basically the same way, which is traveling along the grid trying to kill you. You get a certain number of stuns, however (the default is five), which will stun all the enemies at once for about half a second, letting you through if you get cornered, so that’s nice. Also, a question mark pops up and moves about randomly on the playing field, and if you box it up you get bonus points. If you finish a level, ECCAMF.

That’s Kid Grid. It’s like if Pac-man had an incredibly boring maze design. That notwithstanding, it’s still a somewhat entertaining timewaster. Also, the title screen plays Brahms’s Hungarian Dance No. 5, for you classical-music-on-the-Atari enthusiasts.

Our good friends at Synapse Software, makers of such strange games as Drelbs, Pharaoh’s Curse, Nautilus, Slime, and Claim Jumper, have yet another creative spin on a few old classics, in this case Defender and Choplifter. In Protector II (which is basically just a graphics update and level redesign of the original Protector), you play as a jet fighter plane attempting to save some hapless citizens from an invincible UFO who likes to pick them up and drop them in a volcano for kicks. You start with eighteen people who are scattered about a small cityscape (consisting of about four building ripped straight from Nautilus, sans underwater skyscraper people) and have to carry as many as possible to another city on the other side of the volcano where the UFO can’t go because, I dunno, it smells bad over there or something. You can’t actually kill this UFO, though shooting it stuns it for a bit, giving you enough time to grab as many citizens as you can before they’re all kidnapped. The fewer people that remain, however, the faster the UFO goes, to the point where he’s speeding along faster than you and only stays stunned for maybe half a second, requiring you to have insane reflexes to save everyone. Oh, well, I’m sure he only sacrificed Steve from H.R. to the volcano gods. Nobody liked Steve anyway.

When all of the citizens have been either rescued or immolated, the UFO gets really pissed and flies off, but not before inducing those wacky volcano gods to erupt and bury the new town. Now you’ve got to transfer everybody back out of the city you just put them in into a secret underground bunker before the lava creeps over from the volcano to bury everyone in molten rock and ash. I mean, didn’t we just do this? The other twist now in this back half of the game is the gamut of laser beams that you must now dodge to reach the underground base (you can destroy the guns shooting the lasers, but it’s not an easy task). So it’s different. Why didn’t we just fly everyone to the underground bunker in the first place? Because there was a force field over it that inexplicably got removed when the volcano blew up, of course! Duh!

Throughout both halves of the game there are some Defender-esque enemies pursuing you, including rotating obstacles called “pulse trackers”, turrets that are only destructible about half of the time, and flying chomper heads. They don’t actually eat anything; they’re just disembodied heads with chomping teeth, just floating around, doing their thing. In addition, the volcano likes to erupt and spew a cloud of ash into the air at random intervals which it seems to like to do just as you’re flying over it. There’s also a fuel element to the game (you must fly back to your starting station to refuel), as well as a slight pull of gravity, which you may notice the first time you play the game and immediately crash into the ground upon takeoff.

Protector II is a decent little game. While it obviously has elements lifted from Defender and Choplifter, it also has enough unique twists on those formulae to give it its own identity. The gameplay is solid, difficult without being too frustrating, and the replayability factor is fairly high, as you want to save as many people from that darned UFO as you possibly can. Also, the title screen plays C.P.E. Bach’s Solfeggietto No.2 in C minor, for you classical-music-on-the-Atari enthusiasts.

Thus ends disk 16. Next up: disk 17, containing Clowns & Balloons, Snake Byte, and Knockout!. Until then!