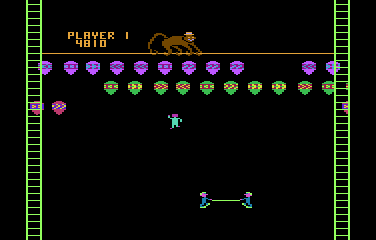 Have you ever been playing a game of Breakout and thought to yourself, “You know what this game needs? More clowns!” Well, boy howdy, have we got a game for you!

Clowns & Balloons is exactly what it claims to be: a game with clowns and balloons. You control two guys holding a trampoline running around underneath a clown (or possibly trapeze artist; I don’t think it’s the clowns who do the death-defying physical stunts at the circus) who bounces up in the air, popping balloons in a series of three lines that scroll past the upper half of the screen. Adding a bit of flavor (read: frustration) to the game is the fact that you have to pop the lines in order; if you pop all the balloons in the middle or upper lines before you’ve finished the lower one, then that line simply replenishes itself, forcing you to pop it again before moving on. Every time you finish a line, a short ragtime riff plays, and when you finish an entire level, a monkey does this:

Which is adorable. Also, ECCAMF.

While this is basically just a goofy version of Breakout, it’s still pretty fun. The clown can move really fast at times (sometimes too fast for you to actually keep up), so it can get frustrating at higher difficulty levels, but the goofy music that plays when your poor clown plows headfirst into the cold, unforgiving ground pretty much makes up for it. Play it today, and pop some balloons/kill some clowns in style! 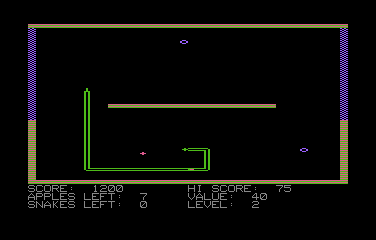 Have you ever owned a Nokia phone? Did you have a computer any time before 1995? If so, you’ve already played this game, so what do you need me for? Snake Byte is a version of that classic snake game where you’re a short snake who grows in length every time you eat something (in this case, “apples”) but can’t run into the wall or your own tail lest you smash your head and end the game. In this version there are several levels with different wall layouts, and you have the option of between 0-2 “plums” flying about the level, which also can smash into your head and kill you. Why can a snake eat apples but not plums? Don’t snakes actually eat, like, rats or something? Also, there is a time limit in which you need to eat a certain number of apples in order to advance to the next stage, after which the required number jumps up (but so do the number of apples strewn about). So that’s a thing.

This is a decent version of the simple snake game, but there’s nothing exactly groundbreaking here about it, especially since you can probably play this game on, like, 1st-generation Zunes or something. Are those even still a thing? I dunno. 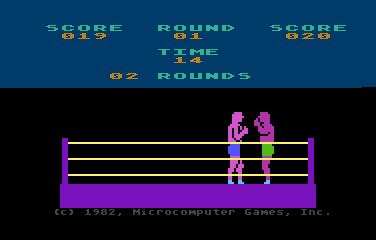 Have you ever had the experience where, in a game of Wii Boxing, a small relative of yours, perhaps a 4-year-old girl, flailed around with the Wiimote randomly and still totally took you down? Did you think to yourself, “Boy, I’d sure like to put that little girl in her place with a boxing game from more than thirty years ago!” What? You didn’t? Well, you probably won’t be interested in hearing about Knockout! from the creatively titled “Microcomputer Games, Inc.” You wouldn’t want to hear about its straightforward gameplay where two boxers can only either punch high, middle, and low, or block high, middle, and low. You couldn’t care less about the fact that these boxers seem to only be made of muscle and embarrassingly short shorts since the graphics are terrible (also the game is almost entirely silent apart from the opening bell and barely audible punching sounds). And you certainly wouldn’t want to know that, despite it being likely the most generic boxing game ever created, there is still more strategy and skill involved here than in Wii Sports. You’d probably want to take the loser’s way out by “sparing her feelings” or “letting her feel good about herself.” Well, guess what, Mr. or Ms. Coward? Quitters never win! (Also, she’d probably beat you in this game too.)

That does it for Disk 17. For the next post, I will be combining a few disks together, since we’re nearing the end of these disks and I’m cutting out some repeats. Next up, Disks 18-22, featuring Wayout, Blue Max, and Survivor. Until then!