Track and Field, although apparently based on the 1984 Summer Olympics in L.A., was more of a generic track and field competition game than anything Olympics-related. You competed in six different events: the 100m dash, the long jump, the javelin throw, the 100m hurdles, the hammer throw, and the high jump. Running was accomplished by wiggling the joystick back and forth as fast as you could until it broke and you had to scour the electronics department at the thrift store in the slim hope you could get a new one. In the jumping games the angle of your jump was affected by how long you held down the button. The coolest thing about it was when you broke the world record (arbitrarily set, as far as I could tell: a quick Google search for the ’84 games revealed that the actual records of the time were from people with different initials and times/distances than the ones present in the game) and got your initials at the top. Unfortunately, as is with most of these games, the list reset itself every time you turned off the computer, so you’d have to beat ol’ ARM and CDM once again. Plus, it seems the competitors all wear toupees, as their hair looks like it’s detached from their scalp every time they jump. The two-player mode was turn-based, with the exception of the 100m dash and the hurdles.

Track and Field was a decent track game for its time. It’s pretty fun to play and master, although you may want to figure out how to get that running action down without breaking your joystick. In addition, if you’re Russian you may just want to boycott this game altogether, for reasons of principle. 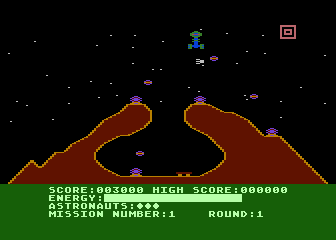 This game’s full name is “Cosmic Tunnels” Episode 4 in the Captain Sticky Saga. I have no idea who Captain Sticky is or what the other games are in his saga, since searching online for other episodes turn up nothing. I presume it’s some sort of odd Star Wars reference, starting with episode 4 and all. Maybe in a few years the creator of this game will release the first three “prequels,” featuring much better graphics and more wooden acting. In any case, in Cosmic Tunnels your home planet seems to be under attack by burning tomatoes—oh, excuse me, meteorites—and the only way to save it is by traveling through cosmic tunnels and stealing glowing bricks from space chickens. There are four tunnels floating above the world, and you blast off the launching pad into one. Your ship then rotates from straight up-and-down to face away from the screen, and the tunnel is portrayed by concentric squares flying past while little alien ship-like shapes fly past. When you exit a tunnel you’re over some strange alien world, where some defense turrets start firing at you. Your mission is two-fold: destroy all the turrets, and land on the landing pad.

At this point the screen switches to a close-up of the surface, and your astronaut exits the ship. He must make his way to the bottom of the screen, grab four glowing bricks (one at a time), and head back to the ship to drop off each one. Barring your way (depending on the planet) are giant space chickens, vicious robots, velociraptors with no face, or giant Pacman-esque creatures with stumpy legs. In addition, two of the planets have holes scattered about, which swallow both you and the creatures (who immediately respawn in a random location, sometimes right on top of you. Fair? Whoever said the game was fair?) The best part of the planet segments are four launching pads, one in each corner of the screen. Two of the planets give you a helicoptor helmet for a brief moment when you step on them, while the other two simply launch you across the screen to the other pad, accompanied by the most awesome BOING!!! noise you’ll ever hear in an 8-bit game. You may just want to spend the game bouncing around on these pads and giggling like a maniac. Or maybe that’s just me.

Anyway, assuming you got all the bricks before you were eaten by space chickens or whatnot, you reboard the ship and re-enter the cosmic tunnel, finally exiting over your world again, where you land on your planet’s surface and rejoice for the ten seconds the game takes to tally up your score. Pretty easy, eh? Well, the entire time you’re in your ship it is slowly running out of energy, which depletes faster if you are hit or fly into the ground or let those little aliens in the tunnels past you without shooting them. Once you run out of energy (or astronauts on the planets), your game is over, with a loud explodey noise and a bright orange screen. Everything onscreen freezes like those old nuclear war movies where you see the couple in the park or the kids playing in the street freeze right before the bomb goes off downtown.

Cosmic Tunnels is a pretty fun game, with its three different play-styles (tunnel, landing & take-off, and planet) and challenging time-limit. The controls are easy, the sound is good, and the graphics were excellent for the era, especially the tunnels and the planet scenes. Besides, I think any game in which you can trampoline over velociraptors is worth a shot. Just stay tuned for Captain Sticky 5: The Giant Chicken Strikes Back! 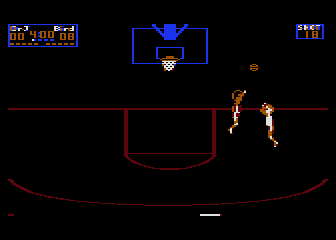 One of the first, if not the first, sports game to feature actual sports stars, One on One pitted Larry Bird against Julius Erving, also known as “Dr. J” in a one-on-one match for the ages. I presume these two were chosen because 1)they were both superstars of their day, and 2)one is black and one is white, so they’re easier to distinguish between on an Atari. In any case, you can choose who to play as (or grab a friend and play as both) and whether to play a timed game or up to a certain score. The basketball play seemed handled pretty well (not being a big basketball guy, I’m not going to elaborate much on that), the characters are animated well, and occasionally one of the players shatters the backboard, causing a grumbling janitor to appear and clean up, chewing you out at the same time. This was one of EA Games’s first sports games, heralding their takeover of all sports-franchise games that holds true today, forcing other sports-game creators to pit made-up team against made-up team (The New York Frogs against the Atlanta Beetdiggers???) I don’t have much more to say about this game, except that when I was younger I didn’t know who Julius Erving was and assumed the “J” stood for “Jordan,” as in Michael (blasphemy, I know), and that the referee looks like Mr. Belvedere.